The North Houston Association (NHA) celebrates its 40th anniversary this year! Numerous accomplishments have emerged throughout its four decades of history within the region it represents — north Harris County and Montgomery County.

In 1982, the North Houston Association was formed with 22 initial members. Doug Leonhard, The Woodlands; Tom Wussow, Friendswood Development; Linville; and Brown were the newly appointed board, with Leonhard as the first chairman. William B. Thorne II had recently retired as president of North Harris Montgomery Community College District (known today as Lone Star College) and was named as the association’s first executive director.

State Representative Ed Emmett then became NHA’s second executive director, serving until 1986, when he was hired by the Texas Association to Improve Transportation Distribution all the while serving as Texas State Representative from 1979-1987. He was then tapped by President George H. W. Bush to become commissioner of the Interstate Commerce Commission in 1989. Emmett then went on to serve as Harris County Judge from 2007 to 2019.

NHA’s founding companies shared a commitment to provide quality growth and regional development through cooperation by utilizing the combination of their years of experience and expertise in various areas. For this reason, the association continues to be true to its goals — advancing issues associated with transportation, the environment, and monitoring development trends to improve and enhance the business climate and quality of life within the region.

From 2003 to 2016, Paula Lenz, as executive director, grew the membership to over 100 diversified companies. NHA continued to be recognized for its strong leadership, service excellence, and for providing strong support on regional issues. NHA has been an advocate for water legislation, the Greens Bayou Corridor Coalition, and the expansion of the Grand Parkway, Houston’s third outer loop. NHA has created strategic relationships with elected officials and other non-profit and government agencies. NHA has a powerful and respected voice that influences solutions.

The North Houston Association was founded 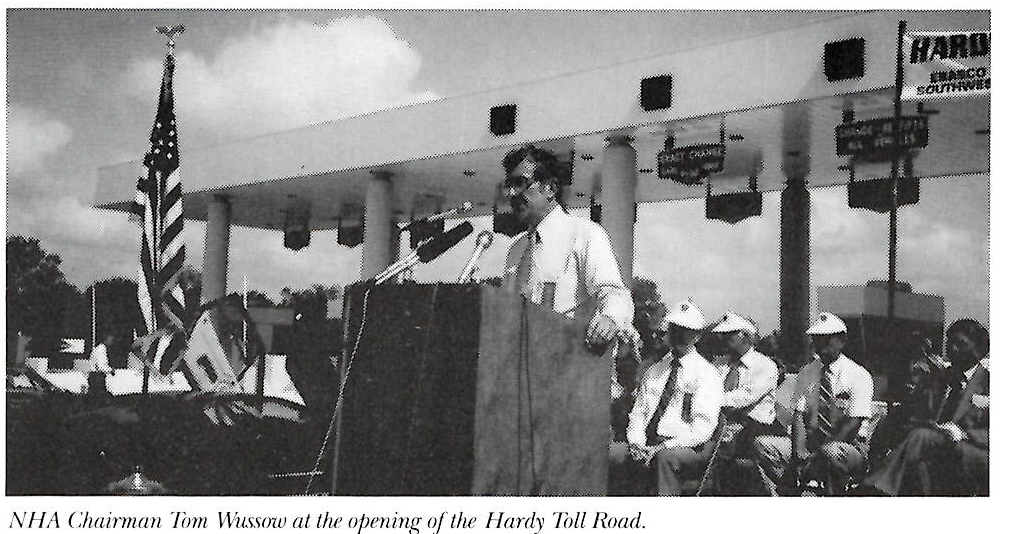 The Hardy Toll Road, completed ahead of time and nearly $35 million under budget, opened to great fanfare June 28. County Judge Jon Lindsay was on hand for the ribbon-cutting, and the master of ceremonies was Tom Wussow, Chairman of the North Houston Association. The 21.7-mile arterial, one of NHA’s..[Read more] 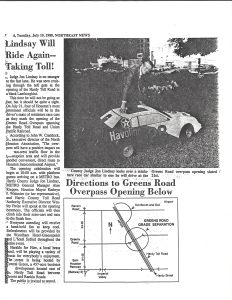 Judge Jon Lindsay is no stranger to the fast lane. He was seen cruis­ing through the toll gate at the opening of the Hardy Toll Road in a black Lamborghini. This time he will not be going as fast, but it should be quite a sight. On July 21, four..[Read more] 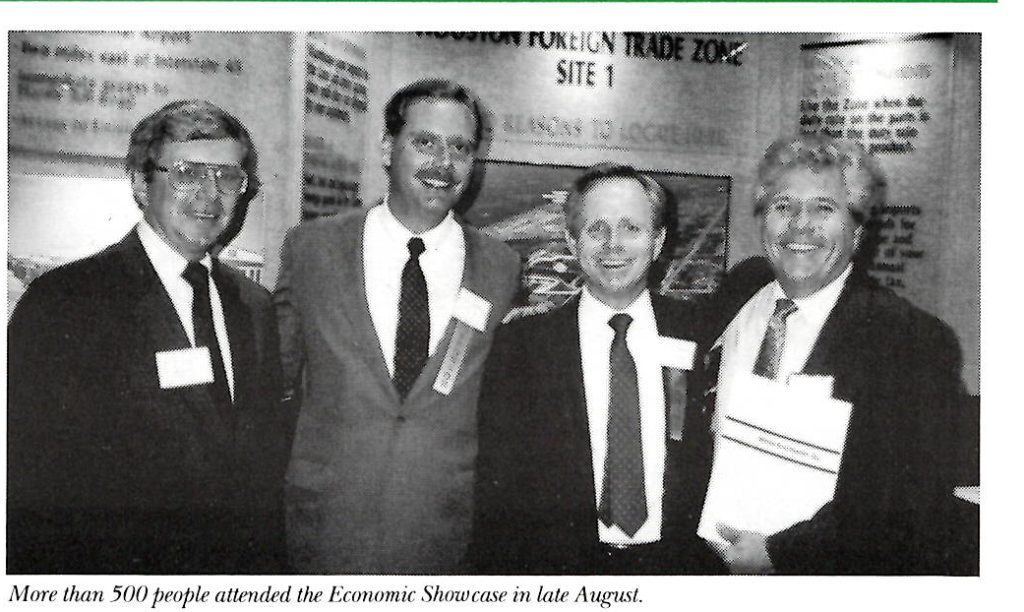 North Houston is on its way back, and it was never more evident than at the Aug. 23 Economic Showcase, attended by more than 500 business people, clients and media. Fifty tables of stunning exhibits demon­strated the progress this area is making in everything from county parks and road construction..[Read more] 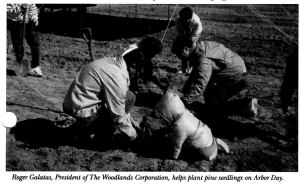 Arbor Day, January 21, proved to be the perfect day to plant trees on the barren tract of land behind Ronnie’s Truck Stop at 1-45 and Rayford/Sawdust. The event was co-sponsored by NHA and the South Montgomery County Woodlands Chamber of Commerce. Chairman or the Chamber Beautification Committee Erin Arber..[Read more]

Sam Houston Parkway/I-45 Interchange to be Completed in July 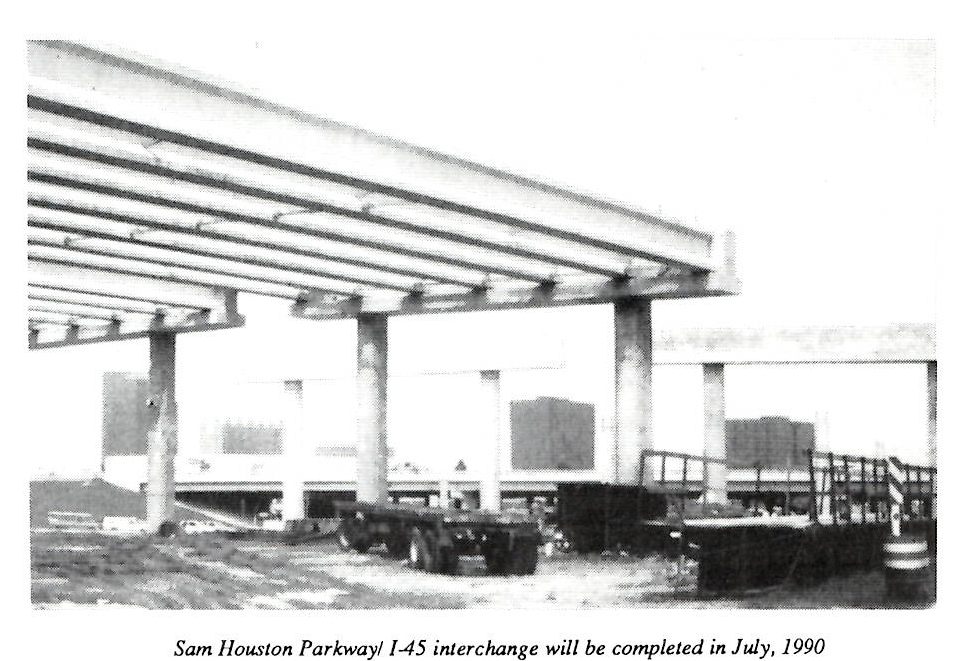 A letter from NHA Chairman, Michael H. Richmond:  As Chairman of the North Houston Association, I am privileged to have the responsibility of setting the tone for the organization. During my two years as chairman, you can be sure that the major issues important to the members are discussed and..[Read more] 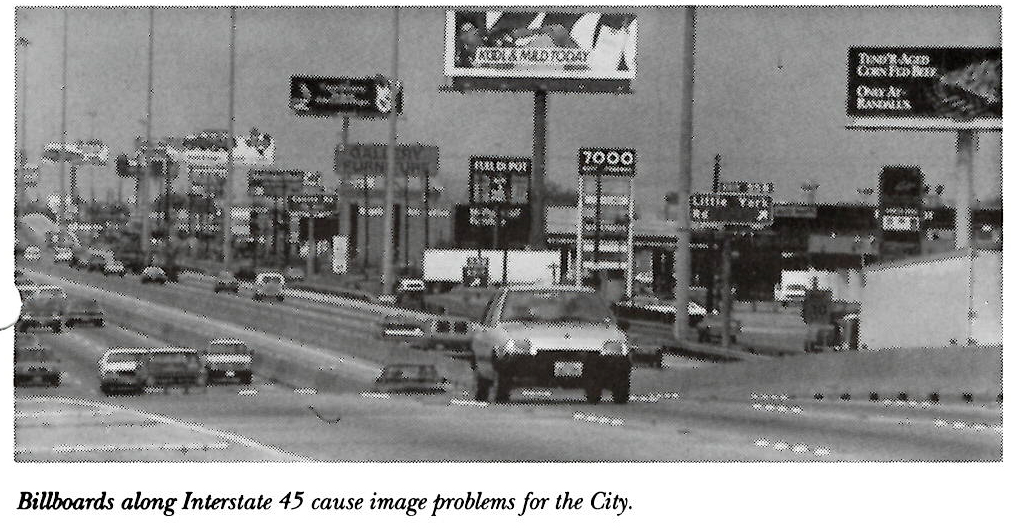 Perhaps no one has done more to beautify Houston than Eleanor Tinsley. The Houston City Council Member, now in her fifth term, takes a strong stand against billboards, she advocates demolition of dilapidated buildings, and she drums up support for more trees and parkland. Tinsley was a featured speaker at..[Read more]

The future of lake Houston State Park is “in limbo,” says Ron Smith, NHA Environment Committee Chairman. The state purchased the 4,712-acre parcel, situated on the northern tip of lake Houston, in 1981, according to Jim Bell, General Parks Superintendent for Harris County Precinct 4. If developed, the park would..[Read more] 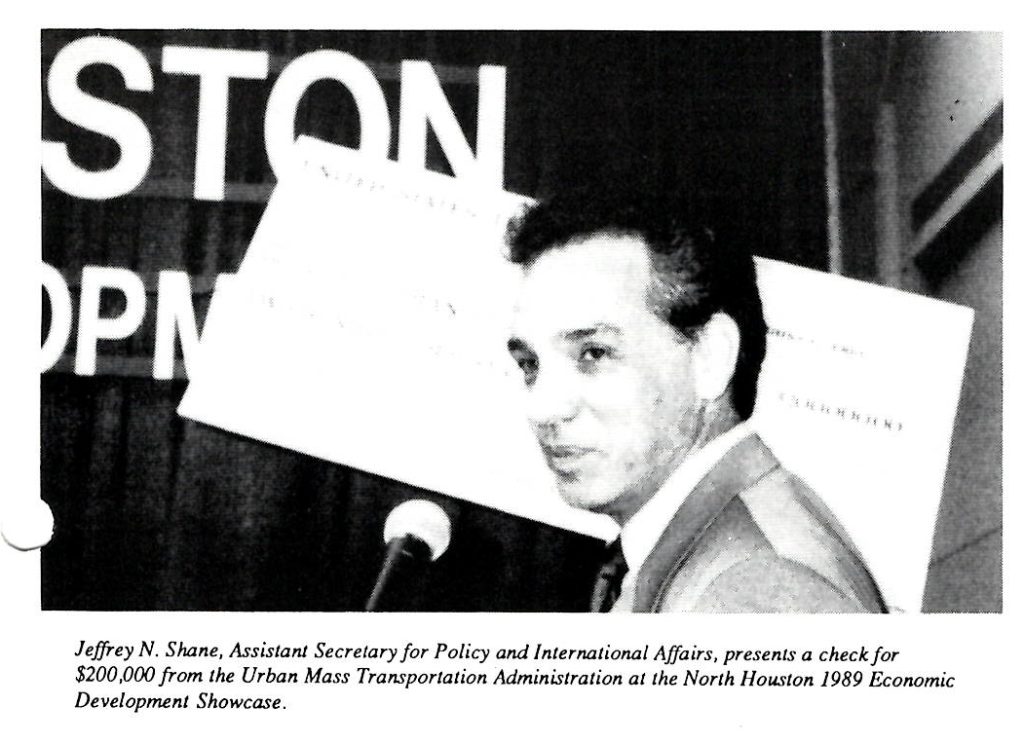 A grant of $200,000 has been received jointly by the North Houston Association and the West Houston Association from the Urban Mass Transportation Administration. The grant was awarded to enable both organizations to study the work destination routes of its residents. According to David Hightower of the Wolff Companies, chairman..[Read more] 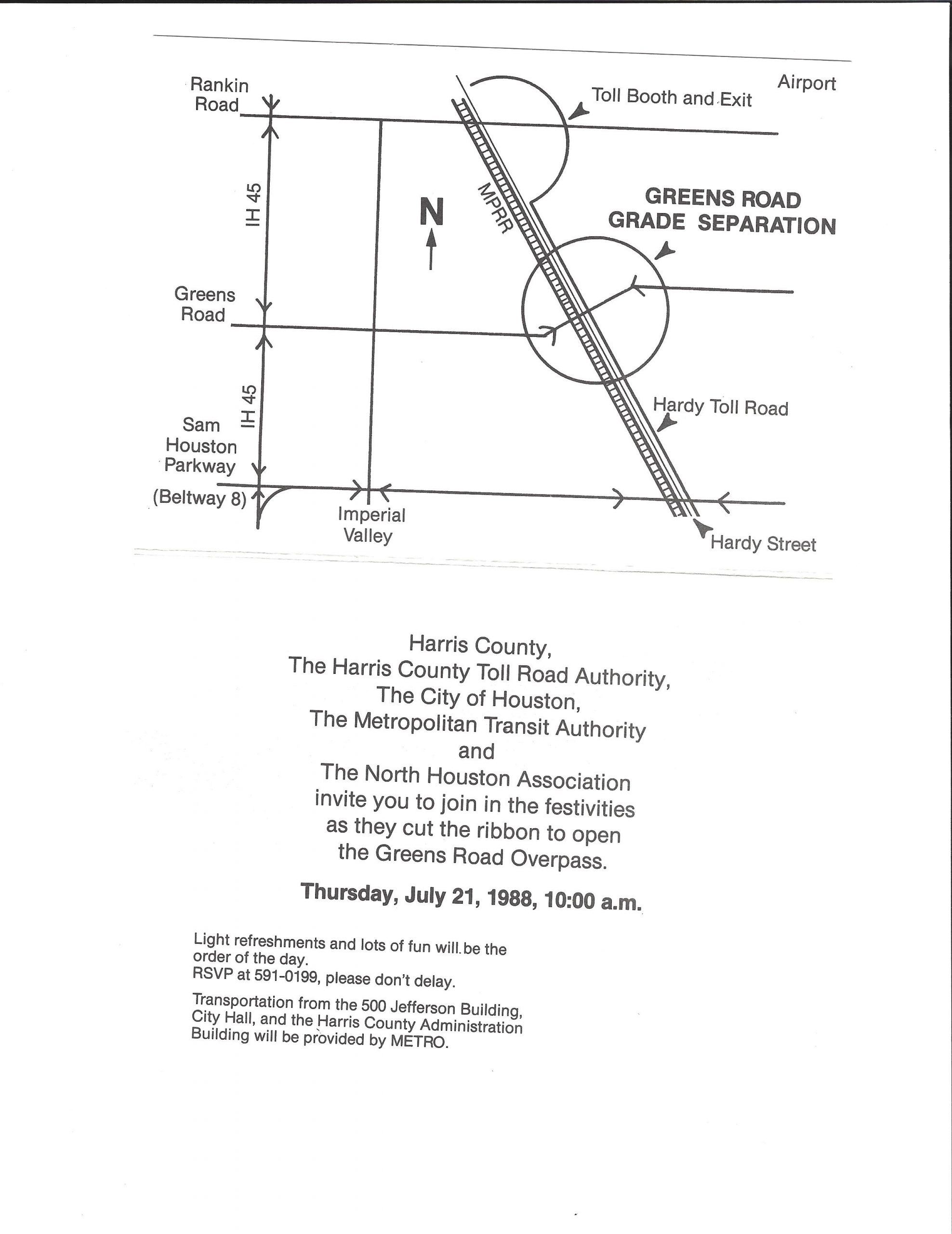 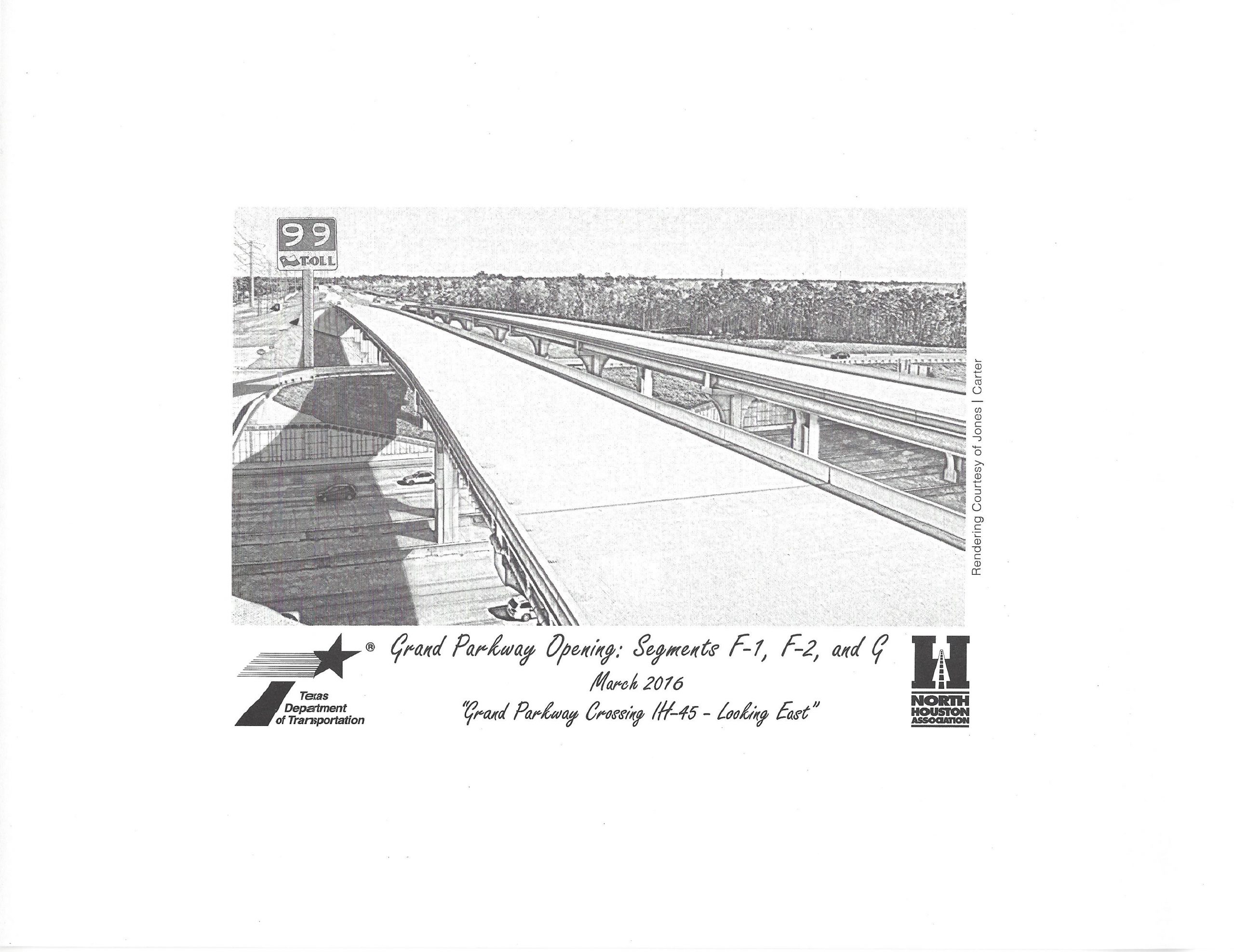 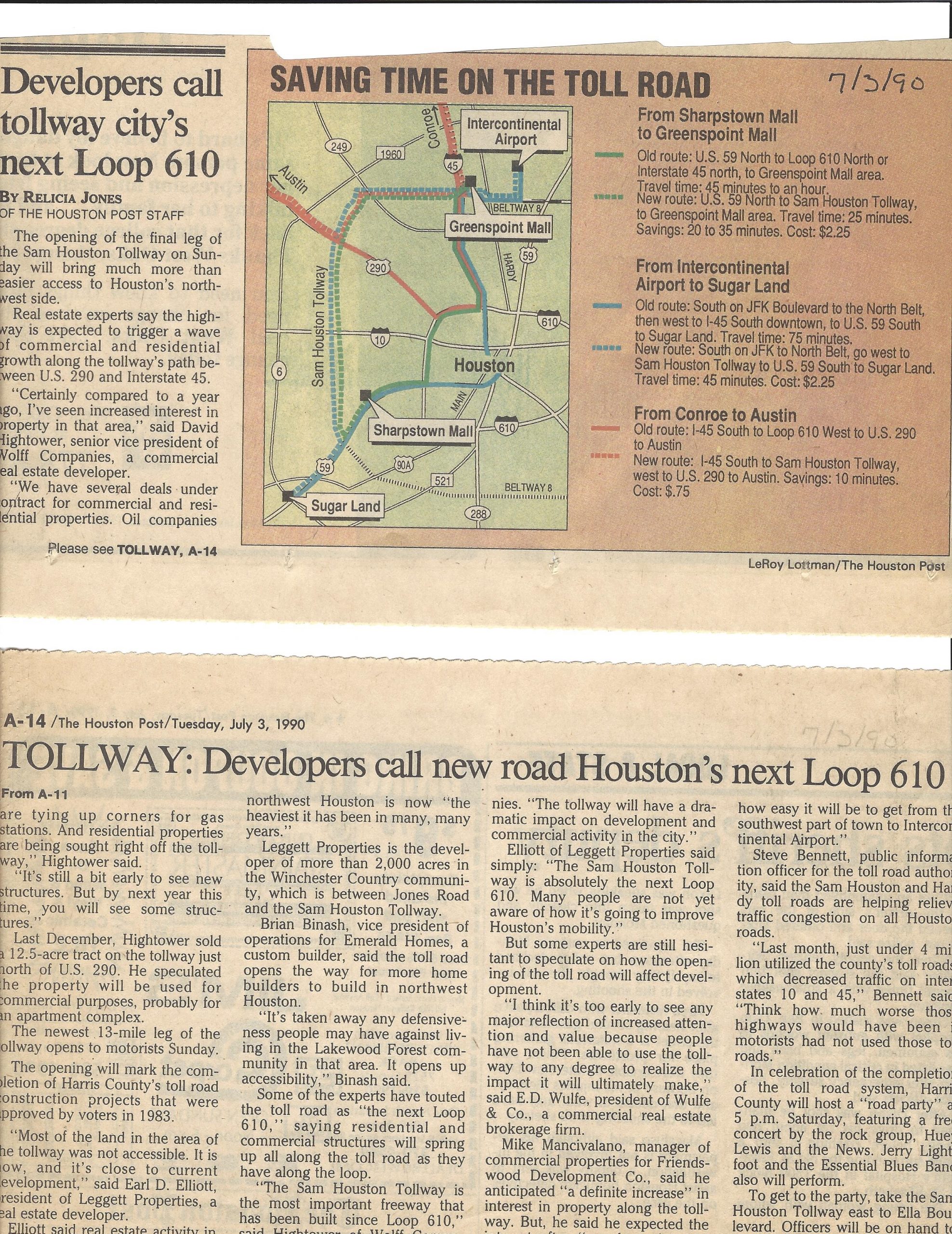