The NHA State of the Counties & Annual Awards Ceremony was a Success!

The NHA State of the Counties & Annual Awards Ceremony was a Success!

Thank you to Harris County Judge Lina Hidalgo & Montgomery County Judge Mark Keough for joining us yesterday, October 15th, for a lunchtime conversation on the state of our two counties!

The ceremony kicked off with our awards portion, each year the North Houston Association presents awards to leaders in the community and in the Association.  These awards are an important recognition for individuals and companies who “go the extra mile”. To be clear, these awards are the 2019 awards, usually presented in the spring and honoring work from the previous year. COVID may have delayed these presentations, but they are just as important today as they were earlier this year.

The first award being given was NHA’s Compass Award. This recognition is specifically for an NHA member who has made a significant contribution to NHA’s programs and projects.

Darrin Willer has been a fixture at the North Houston Association for many years, starting with participation on and leadership of the Transportation Committee, continuing through today, where he serves on the board as past Chair, and regularly provides updates on regional transportation issues, including the IH 45 NHHIP project, a project that he has been actively involved with during the past 10 years with the TxDOT Houston District (and one of our other Award winners to be announced later in the program).

Our next award of the day was the  Environmental Impact Award that recognizes an individual, company or project that has preserved and protected the environment in north Houston.

The hard working people at the Harris County Flood Control District have contributed to the health and safety of both Harris and Montgomery Counties for more than 80 years, Today, the North Houston Association would specifically like to recognize the impact of their work in the Cypress Creek Watershed.

The last of our three awards to be presented was the North Star award. The North Star award recognizes an individual who has made a long-term, significant contribution to the region, and this year’s recipient undoubtedly fits that picture.

Quincy Allen was born and raised in Houston and began serving Houston’s mobility needs in 1985 at the start of his career at TxDOT. He quickly climbed the ranks at TxDOT, becoming Houston District Engineer in 2015.  Of the 25 Districts in TxDOT, the Houston District has the largest population, most registered vehicles, and highest number of vehicle miles traveled.  In short, this is a huge responsibility.

Please watch the recap video above for the complete ceremony and conversation with each Judge. Thank you all for your continued support. 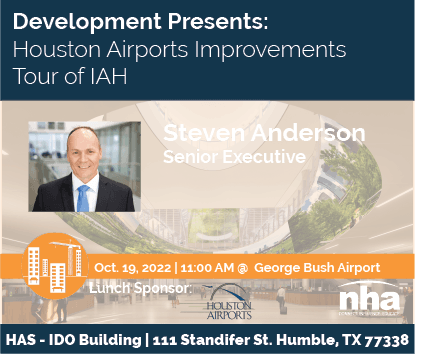 Do your best to arrive early, the presentation starts at 11 AM sharp, and the terminal redevelopment tour begins at 11:30 AM sharp. (more…)